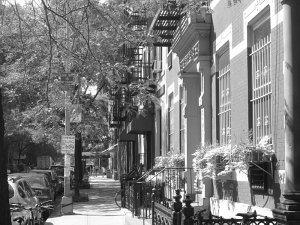 President Theodore Roosevelt, Oscar Wilde, and James Cagney are a few of those who’ve resided in Gramercy, one of NYC’s most upscale neighborhoods.

This walled, two-acre park is one of New York's most exclusive green spaces (Sunnyside Garden in Queens is NYC's only other private park). Only residents of the 39 buildings directly surrounding the park can access it. If you can't afford property in the park, don't fret—guests of the Gramercy Park Hotel and the National Arts Club can access keys, and the park is open to the public every Christmas Eve caroling, and those willing to shell out for a night at the                    Gramercy Park Hotel receive the same access as those who pay an annual fee for a key to the park. The surrounding streets, meanwhile, have remained more or less continuously fashionable for 180 years—they're packed with notable architecture; diverse dining options like Casa Mono and Friend of a Farmer; and nightlife—especially live music at Irving Plaza, The Gramercy Theatre and Jazz Standard. We bet President Roosevelt would be delighted to live there even today.

Landmarks Around the Park

A quick stroll around Gramercy Park's vicinity yields peeks at landmarks that are notable both for their architecture and for what goes on inside. The  National Arts Club is worth a look for its facade alone—remodeled in the 1880s by Calvert Vaux, the building's exterior features busts of Shakespeare, Goethe, Dante and others, along with a carving of Michelangelo's head. Inside, some gallery shows and other events are open to the public. And if you find a member who'll bring you to the dining room as a guest, the cuisine will be well worth the effort. The Players, another private club, has counted the likes of Mark Twain, Norman Rockwell and Arthur Miller among its ranks. Its home, a Stanford White–remodeled mansion, mostly hosts private events for the organization's illustrious membership, but occasionally opens its doors to the public for special events. The Brotherhood Synagogue inhabits a former Quaker meetinghouse distinguished by, among other features, its soaring windows and distinctive pediment. Today, the Greek Revival building hosts a full slate of community activities including, for example, concerts and yoga. Another house of worship, The Parish of Calvary–St. George's is a national landmark and a striking Romanesque Revival structure. And at Stuyvesant Square, a four-acre public park (no key required!), you can salute Gertrude Vanderbilt Whitney's bronze statue of Peter Stuyvesant himself (his great-great-grandson sold the land to the City for the princely sum of $5 in 1836).