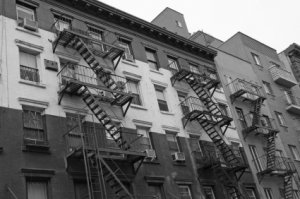 Over the past two decades, The Lower East Side (or LES) is best known these days as a place for an exciting night out. Its narrow streets are lined with trendy bars, clubs, restaurants, galleries and music venues, but the neighborhood has a gritty history too. Nowhere else can you find stilettoed club goers waiting in line across the street from a tenement museum, and some vestiges of its immigrant, punk and artistic past remain—the mix adds to the area's vibrant energy. And even if it is less a wilderness these days, the LES is still undeniably a circus—a melting pot of art, culture and culinary magic whose creativity often inspires the rest of the City and points beyond.

What to do in the Lower East side?

Katz's Delicatessen screams with tradition as loudly as Meg Ryan did with delight while eating there in When Harry Met Sally…. (Go ahead, sit in her seat, have what she had.) The classic New York deli serves the Platonic ideal of the Reuben, be it pastrami or corned beef, along with specialties including salami, knishes, matzo ball soup and other savory treats.

Geoff Dyer concludes a quest for the greatest pastry known to man. Eating his way from London through Paris, New Orleans, Rome, New York City and Tokyo, he is converted, in a quasi-religious epiphany, from croissant enthusiast to doughnut lover—by Doughnut Since its founding in 1994 by a master baker inspired by his grandfather's doughnut recipe, Doughnut Plant has opened outposts in Japan and Korea and expanded its menu to include churros and “cake” doughnuts (which have a different texture than the standard versions), as well as homemade jelly.

Varieties include crème brûlée, tres leches, passion fruit, and peanut butter and blackberry jam. All of these are capable of inspiring religious devotion.Those who prefer their sugar to come in hard or gummy varieties, however, should plan a trip to Economy Candy. The overstuffed emporium is a Willy Wonka fantasy come true—from the ol'-timey classic confections (Atomic FireBall! Pez!) to popular candy, kosher sweets, halvah, Turkish delight, by-the-pound goodies, and even sugar-free options.

Arts & Culture New York City has long been a movie town, both as a shooting location and as a cineast paradise, and there are numerous repertory, indie and art-house venues spread throughout the City. The Sunshine Cinema is an art-house with stadium seating and big screens, and the venue features sleeper and breakout indie films for good, long stretches, in case you missed them when they premiered. A couple of blocks north, the Anthology Film Archives screens hard-to-find world cinema, as well as classic and newly made avant-garde films.

If you prefer art you can view from a closer vantage, there is a range of destinations.

The New Museum is the Lower East Side's primary cultural hub, mounting contemporary art shows that draw interest from observers around the world. The works on display are serious, but the institution certainly has a whimsical side: in the past, passersby could jump onto a slide in the museum or see a rainbow-colored “Hell, Yes” affixed to the outside of the building. The museum's bookstore is worth a visit for those seeking tomes about such subjects as architecture, design and art criticism—and, if you're hungry, the Hester Street Café (a newish collaboration with the well-known LES weekend market, Hester Street Fair) has a range of sandwiches, salads and baked goods, as well as caffeinated drinks, to keep you sated.

The Tenement Museum, meanwhile, makes for an illuminating exploration of New York City history. Six immaculately restored apartments, from five different decades in the building's 150-year history, re-create precisely what the tenement apartments would have looked like over the years. Walking tours of synagogues are offered by the Lower East Side Jewish Conservancy LTD, which focuses on preserving Jewish sites and culture in the area through private and customized jaunts. A few blocks away, in what was the first synagogue built in the area, the Museum at Eldridge Street Synagogue provides a lens into the lives of some of the neighborhood's first Jewish inhabitants. The 1887 synagogue was restored in glorious detail over the course of more than 20 years. In addition to showcasing the area's history, it still hosts services. The renovation was by no means staid—it includes a stained-glass window by artist Kiki Smith and architect Deborah Gans.

Gastropubs Since opening in 2003, chef/co-owner Wylie Dufresne's Michelin-starred wd~50 has been on the vanguard of inventive, ingredient-driven tasting menus and is acknowledged as one of the best restaurants in New York City. The former philosophy student and protégé of Jean-Georges Vongerichten has a creative, personal and humorous approach to molecular gastronomy—take the “pho gras,” for example. In mid-2012, he reimagined his classic menu, resulting in a sprawling 12-course adventure with a culinary Neal Cassady at the wheel. For those who only ever want to hear Prince play songs from Purple Rain, Dufresne offers “From the Vault,” a five-course meal presenting some of the restaurant's greatest hits.

Scene and Heard Since the heyday of 1970s punk, the LES has been synonymous with music. Among the City's best current venues is the Bowery Ballroom, with its consistently strong bookings, especially good sound and excellent visibility. The downstairs lounge is an added plus—stylish, romantic in an old-fashioned way, and 40 decibels more comfy than the main room, in case, you know, you want to talk to someone. On the strength of its bills alone, the Mercury Lounge is hard to beat. Numerous local bands to hit the big time—like the Yeah Yeah Yeahs and The Strokes—began their odysseys here, and you'll find the next generation of hitmakers putting in their time there now. And when you want a culinary complement to your music listening, Cake Shop on Ludlow serves cake, coffee and beer and stocks records for sale. Located half a block up from the corner of Rivington where the iconic Paul's Boutique album cover was shot, the venue showcases a mix of poetry, indie, metal and garage bands that the Beastie Boys would surely approve of.

Gallery Go 'Round It's said that the best portraits of a city, culture or country are often painted by out-of-towners—those who see the place with fresh, unbiased eyes. That's certainly true of this neighborhood: over the last half of the last century, many of the area's immigrants were artists looking to live inexpensively, enterprising personalities who established a cohesive scene and opened the first of the great LES gallery spaces. About a decade after the events depicted in Downtown '81 (in which Jean-Michel Basquiat wandered the streets of the LES), Aaron Rose's famous Alleged Gallery opened on Ludlow, which helped launch the careers of Harmony Korine, Spike Jonze, Shepard Fairey and Mike Mills, among others. Though Alleged is now gone, the art scene in the neighborhood has never been stronger. The sleek, contemporary Mayson Gallery showcases work by emerging and innovative artists like Kenneth E. Parris III—who documented the final two-year world tour of the Merce Cunningham Dance Company—and modern abstract painter Andrei Petrov. Bosi Contemporary promotes the work of emerging artists, as well as exhibitions of more established artists, and special historical and guest-curated shows. And there's a nice art crawl to be had if you start at the lower edge of the neighborhood and head north; make stops at Invisible Exports on Orchard Street, Lehmann Maupin on Chrystie and Sperone Westwater on the Bowery.

LES After Dark When Richard Price gave the Lower East Side the James Joyce treatment in his novel Lush Life, he set the drama in a café that's basically a thinly veiled Schiller's Liquor Bar. For good reason. Restaurateur Keith McNally's subway-tiled bistro pub has for a decade been the Cheers of the neighborhood—a great bar with good nosh where everybody knows your name. The Leadbelly, a more recent arrival, has updated the concept, featuring a bluesy soundtrack, Airstream-inspired design and a menu piled high with oysters and comfort food. The Lower East Side has always been the perfect destination for those who simply want a   no-frills drink, and every nook and cranny of the neighborhood boasts its own local dive. Barramundi on Clinton is a charmingly